"In country music, there are endless debates about what kind of instrumentation really defines the genre as it constantly updates itself and divides into traditional and contemporary factions. Home Free found an ingenious way to get around those kinds of arguments: just ditch the instrumentation altogether.  Their five members are all about what has always inarguably been at the core of country music: the human voice.

Home Free is country music’s only real a cappella group is a novelty that, on the radio or on record, might only occur to listeners after the fact, since arrangements that are so fully fleshed out — and we do mean fleshed out, as opposed to machined out — have a way of tricking the ear. In concert, of course, it’s a different story: all at once, from first row to last, jaws drop at the first sight of all those throats in action, followed by nodding, dancing and even crying as the group’s powerful musical storytelling unfolds.

Home Free are returning with their fourth studio album, Dive Bar Saints, and there are a lot of new wrinkles to their story. But that most critical element remains intact. Listening to the leadoff track, “Remember This,” you might wonder if they’ve finally just given in and added instrumentation to their previously all-vocal catalog? Not to worry; that’s just an optical illusion. “We're completely a cappella. At all times,” Tim Foust assures us, laughing that the question still comes up. Foust is the bass player of the group… the bass voice player, that is. “Never say never,” he adds, asked if they might ever consider giving Nashville’s finest studio musicians some employment, “but that's what sets us apart. I mean, when we collaborated with Charlie Daniels, we let him play his fiddle, but that's about it.” 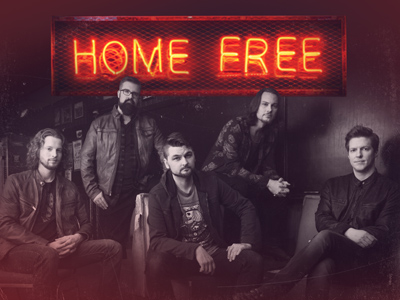