Small-town sibling trio Girl Named Tom seeks to create harmony in a world divided. With their distinctive harmonies and heartfelt performances, Bekah, Joshua and Caleb Liechty won the hearts of America while becoming the only group to ever win NBC’s “The Voice.” In addition to their chart-topping covers (“River,” “The Chain,” & “Dust in the Wind” among others), GNT writes original music that will almost certainly project them to becoming the best-known harmony trio of their generation.

With their debut EP, "Another World," Girl Named Tom sweeps the listener into reflective space, exploring fond memories, global issues, and intimate conversations. Audiences have been "...blown away by the musicality and harmonies, creativity, honesty, beauty. This sibling trio is stardust." Crazy World exhibits "crystal clear lead vocals, driving (and unique) percussion, and after 3 minutes build up an amazing section of their 3 voices intermeshing together."

Based in the Midwest, Girl Named Tom performed all over the country during the band's first year before the pandemic struck. Now, after winning The Voice, they cannot wait to hit the road and visit new fans!

**JUST ANNOUNCED** - Marielle Kraft will be the opening act for Girl Named Tom. Marielle is an indie pop singer/songwriter, now based in Nashville, she displays a craftsmanship beyond her years.

When you hear Marielle Kraft’s music or experience her candid live shows, you feel as though you already know her. The indie pop singer/songwriter, now based in Nashville, displays craftsmanship beyond her years, following suit to artists like Shawn Mendes, Maisie Peters, and Taylor Swift.

Self-taught, the Rhode Island native began playing guitar at 16 and soon writing songs that strike chords with listeners everywhere. Her gift for storytelling is evident through her use of salient detail, raw emotion, and poignant word choice to describe moments “exactly as they feel.”

Over the past few years, Marielle Kraft has self-released one original EP, eight singles, and four official music videos. 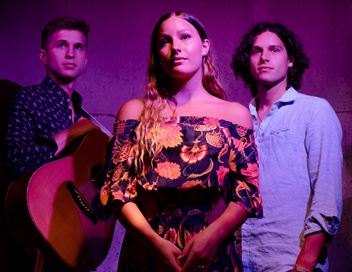