Let’s Hang On! has established itself as the premiere experience to Frankie Valli and The Four Seasons.  Capturing that iconic sound with crisp harmonies and sleek choreography you are sure to take a trip down memory lane with some of the best music from the 1960’s.  Proudly dubbed America’s #1 Frankie Valli favorite show, if you liked “Jersey Boys” you will love Let’s Hang On!

Let’s Hang On! is a group of 10 seasoned entertainers who are preserving the music and style of the iconic group Frankie Valli and The Four Seasons. Respectfully playing all the classic “Seasons” details, Let’s Hang On! also pays respect to the Broadway show, The Jersey Boys. Let’s Hang On! captures the trademark vocal virtuosity, tight harmonies, and crisp choreography that made The Four Seasons one of the greatest vocal groups of all time. This full blown stage show includes all the great Four Seasons’ mega hits like: Sherry, Big Girls Don’t Cry, Walk Like A Man, Can’t Take My Eyes Off Of You, December ’63, Who Loves You, and many more mega hits of the 60’s; all presented in a high-energy and polished production. If you liked Jersey Boys, you’ll love Let’s Hang On!

Let’s Hang On! is proud to be one of the few remaining touring productions that guarantees a Live Band with EVERY show! No tracks, real music and that authentic Frankie Valli and The Four Seasons sound. Great music shouldn’t be compromised. The Let’s Hang On! band captures the best of this 1960’s music with precision. Experience the difference of pure Live Sound and let the Let’s Hang On! band take you down memory lane all over again. The full Let’s Hang On! cast is sure to make you want to get out of your seat and dance the night away to some of the best music to come from the 1960’s! 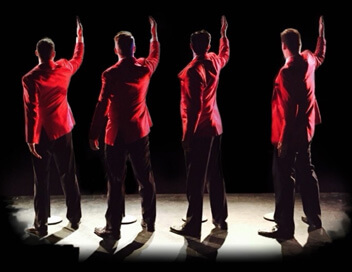