“A Closer Walk with Patsy Cline” will be a farewell performance by Gail Bliss.  "A Closer Walk with Patsy Cline" is a 2 act theatrical tribute to the legendary country and pop icon, PATSY CLINE, as seen through the eyes & heart of a local radio disc jockey in Patsy’s hometown of Winchester, Virginia. Set in 1963, the show celebrates Patsy’s music, career, and life’s highs and lows, from her humble beginnings to her rise to fame with performances at the Grand Ole Opry, Las Vegas, and Carnegie Hall.  The show is a step back in time with radio jingles (Mr. Clean, Winston Cigarettes) performed by the on stage, in the studio, “on-air” band, and comedy bits from the Opry and showrooms of 1960’s Las Vegas Strip brought to life by co-star, Dan Embree. Patsy, played by Gail Bliss, is backed by an authentic 6 piece honky tonk band as she sings over 20 of Patsy Cline’s hits, including “Walking After Midnight”, “Sweet Dreams of You”, “I Fall to Pieces” and “Crazy.”  Patsy Cline's husband, Charlie Dick, said Gail's portrayal of the legendary singer, "She's the best I've ever seen!” A show that appeals to all ages, A Closer Walk with Patsy Cline, provides a wonderful blend of theatre and music into a magical evening at The Alabama Theatre. Don't miss Gail's finale appearance as the legendary Patsy Cline. 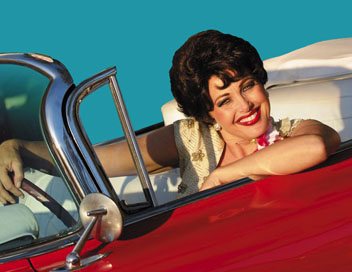